In 2000, Clément was finishing his very first electro-brazier for his university final year project. Fifteen years later, it is such a local success that Clément has developed it to make it even better. He called us as soon as he finished to let us know...
Protecting the planet

Clément Shala is an engineer from Congo. He started to sell his invention, the electro-brazier, fifteen years ago.

This brazier has a lot of advantages: it is economical, easy to use and is eco-friendly, of course: no need to use coal anymore, organic waste is enough to produce heat  !

Clement just renewed his invention, for an ever-so practical and economical cooking.

Instead of four, it is now only two used battery that are needed in order for the motor to work.  A switch has now been implemented in the metal box to open and close it. And the big change of this new brazier is a lamp that can enlight up to 8 squarre meter!  A real revolution when once knows how dark it can get once night falls in remote parts of the world.

Help Clément finance his braziers, and contribute as such to our planet’s sustainable development ! 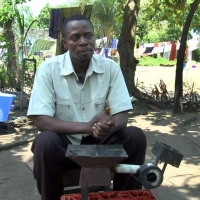 My cooker lets nothing go to waste