When administration and agriculture don’t get along…

Last monday, Emmanuel Giboulot, an organic wine maker from Burgundy appeared in court for refusing to treat his vineyards; his story looks strangley like our pioneer's Olivier Cousin and allows a shot reflexion...
Caring for the mind and body Mots-clés : Sustainable agriculture, Healthy food

In June 2013, Emmanuel Giboulot, along with all the wine makers from the Côte d’Or (Burgundy) received a letter from the circonscription, making vineyards treatment mandatory due to a desease that had developped in another circonscription nearby and had ruined 12 hectares of grapes.

Emmanuel, whose family grows organicly since the 70s, simply refused to do so, as the insecticide was a prevention and that no sign of the disease had been detected in his region.

That’s why he was facing the court of Dijon on Monday 24th of January, facing 30 000 euros penality and 6 years in prison. In a few weeks, Emmanuel got more than 400 000 people to sign a petition (the site even crashed due to the abondance of signatures !)

On monday, there was about 1000 people gathered in front of the court house to show Emmanuel support. In the end, Emmanuel got 1000 euros penality, a sentence that’s seen more as a symbolic one.

But Emmanuel isn’t the only one and it appears many organic wine makers are facing similar problems. Remember our pioneer Olivier Cousin?

Olivier had primely appeared suspicious to the AOC federation (Appellation d’Origine Controllé, which is a label allowing you to name the wine according to the name of the region) for prefering to harvest with horses rather than with modern machines.

In 1995, the same federation required him to quit the ‘Anjou’ appellation, making his wine as such a ‘vin de table’ which are a lot less recognized since no information from the origin is needed. He refused to do so, after all his wine is a ‘vin d’Anjou’. The federation took him to court last october and we still don’t know the outcome of the trial.

One thing is sure though: the heavy administration is taking over the wine quality. Knowing the difficulty french wine makers are facing nowadays, especially considering the increasing international concurrency, one could wonder how pertinent these procedures are.

Believe us, we’re frenchies: the most important is that the wine is good ! 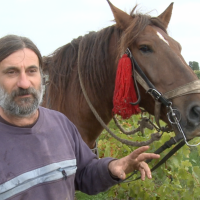 I cultivate my vineyards with horse power