Would racial segragation be at the heart of the Detroit crisis?

Racism and racial segragation would be two variables to take into account if one wishes to explain the city’s economical and social decline.

From the 1920’s onward, a large amount of african-americans migrate to what seems to be at the time the materialisation of the American Dream. The city and its three giants (Ford, General Motors and  Chrysler) heavily recruit and for just under 30 years, develop the economical growth.

However, the white people do not react well to the arrival of their black peers: soon, segregation occupy every sphere of the public and private spaces. The white community leaves the city center, and as such no investment is made. This strongly brings a high level of unemployment, creating as such frustration, criminality and black market.

In these times of crisis, we have a tendancy to look out for external causes, that are independant from our everyday actions: global politics and global economy seem to hold solely responsibilites. We have a tendancy to deny that everything is interconnected, and this interconnection is especially true at a time of globalisation. A city’s economy also depends on its socio-political context. 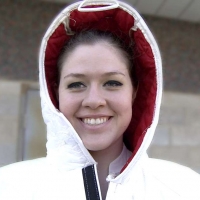 I created a blanket coat for the homeless