The French ADEME Innovation Forum is a gathering of the curious, the passionate, and those actively working toward a sustainable global future. In its third year, the event was once again a catalyst for new ideas and progress in collective action and sustainable development.
Caring for others Mots-clés : Innovative pedagogy 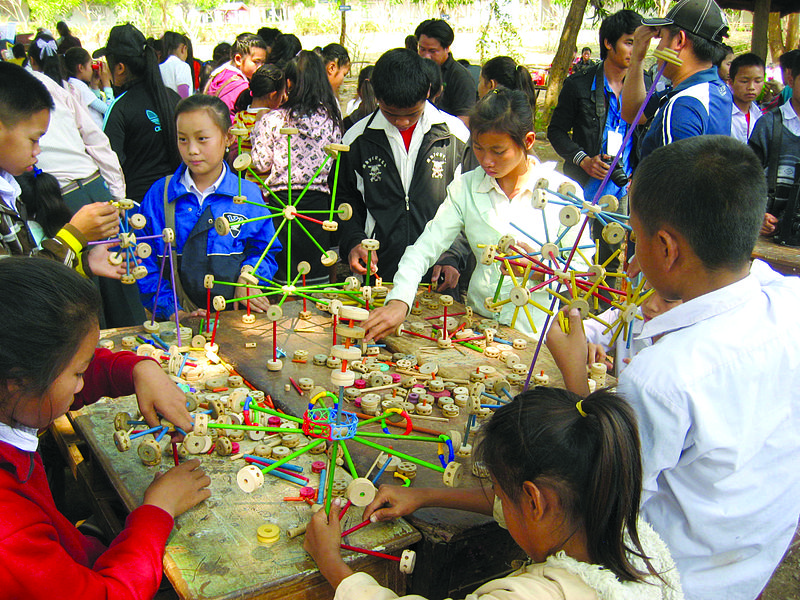 The focus of this year’s forum was research related to “living together in the everyday”. A gathering of experts at ADEME shed light on the essential characteristics of this emerging field of research. Although we may not realise it, our lives are governed by invisible social mechanisms that demonstrate an extraordinary collective intelligence.

Jean-François Noubel is the founder and first president of the Institute for Research on Collective Intelligence (IRIC) and has been writing passionately about social engineering for many years. In his opening remarks, he countered the claim that collective intelligence is merely an abstract and inaccessible theory: “Collective intelligence has to do with our daily lives and has a strong social dimension.”

To understand the ways in which human behaviour is structured by living together, it is helpful to break down collective intelligence into different types. For our purposes, we can distinguish four operational modes of collective human interaction.

In this mode, the individual has very little room to manoeuvre within the community. Sitting at an intersection in a traffic jam is a good example. Despite the chaos that this scene might suggest, drivers naturally organize themselves so that everyone can get to the end of their journey safely.

This type of intelligence gives individuals plenty of room to manoeuvre because they understand the whole of the group with which they are interacting. This “holopticism” has the advantage of not creating a dichotomy between the individual and the group. A jazz band exemplifies this kind of intelligence. The piano soloist, with or without sheet music, is familiar with the theme of the jazz being played and the musicians who will interact with it. He will therefore attempt to contribute to the overall equilibrium of the piece without encroaching on the sound fields of his fellow musicians. If all goes well, the desired effect will be positive: the group will remain stable and suffer no disharmony. The disadvantage of this type of intelligence is that it is possible only for small groups of people in relatively close proximity.

Dominant in our societies, pyramidal intelligence can organize the actions of many individuals. Its guiding principle: leaders at the top of a hierarchy are endowed with the power to look after the welfare of the group. They make plans and communicate their vision to individuals at a lower place on the hierarchy, who then act accordingly.

The benefit of this mode of interaction is its ability to maintain relative stability in large groups. Stability increases when leaders are driven by a genuine civic engagement for the collective entity they manage.

However, history has shown that this pyramid scheme can lead to cruel abuse, including leaders whose vision has proved detrimental to the groups they were charged with looking after. Another problem with this type of intelligence is the highly centralized decision-making, which limits the diversity of societal contributions. Conflicts regularly appear between the goals of the executive class and the aspirations of civil society.

Considered by IRIC researchers as “a new form of organization of our species,” holomidale intelligence manifests as a society in which people constantly communicate and share knowledge, with the ability to “synchronize actions and complex projects without falling into the limitations of pyramidal collective intelligence and its hierarchical chain of command.” Also, “social entities arising from holomidale collective intelligence seem to possess the capacity for reflexive consciousness, self-governance, self-actualization, self-evolution.”

There is no lack of contemporary examples of this new collective ethic: the mobilization of civil society through social networks, collaborative software development through open source technology, local complementary currencies, carpooling, collaborative consumption, energy self-sufficiency with renewable energy, the sharing economy, collective governance, and sustainable management. The list is long and encouraging and demonstrates the spectacular advance of the spirit inherent in the concept of “sustainable development.”

Jean-Francois Noubel touts the advantages of these new models. “In these new social ecosystems, collective and abundant energy once mitigated by the pyramidal authority is liberated. It can thus be fully utilized, and for more virtuous ends. When everyone knows that their voice and actions count, it fosters the desire to do better, for everyone.”

These new movements in civil society suggest that attitudes are shifting toward more cooperative models. So could the age-old dream of human coexistence and cooperation, of a more harmonious society, become a reality after all? Of course the answer to this question depends on us. Stay tuned…

From our friends at: Green et Vert